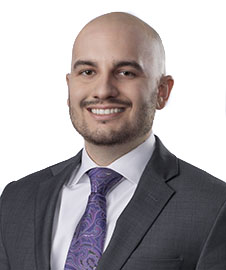 Although he was born in California, Vince has lived in Nevada for most of his life. Vince graduated from Centennial High School in Las Vegas, where he was part of the school’s nationally recognized Navy Junior Reserve Officer Training Corps (NJROTC) program. After high school, Vince traveled north to attend the University of Nevada, Reno. Vince earned his BA in political science with a minor in business administration in 2013.

After college, Vince returned to Las Vegas to attend the William S. Boyd School of Law. While in law school, Vince served as an Articles Editor for the Nevada Law Journal. In his last semester, Vince was a student attorney (admitted under SCR 49.5) in the Education Advocacy Clinic, where he worked with students from the UNLV Educational Psychology Department to advocate for the educational rights of children with disabilities in the Clark County School District.

When he is not working, Vince enjoys spending time with his wife and family. He loves going to the movies, playing basketball, walking his dog, and reading.